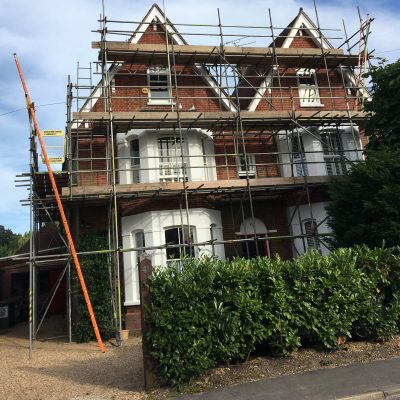 During the summer, we took the opportunity to redecorate the front of the house. The scaffolding was up for a while. If anyone asked where we lived we just told them to look for the scaffolded building. At times the scaffold boards were too close to the windows and bay, restricting access. At other times there was a big gap. So I had to shuffle boards to feel safe. I didn’t drop too many items. When I did it was just after someone had mentioned it.

Herb Miller lives in Rowlands Castle with his wife and two cats. He’s been collecting SBs for nearly half his lifetime. If you ask him why he’ll say Simply Because. His favourites to date are the short but sweet, palindromic sub bus, the sulphurous brewmasters Googlewhack and of course, seriously bonkers, simply brilliant and silly B. He fully expects his short booklet to become a shortlisted bestseller. Buy the book from herbmiller.me/shop