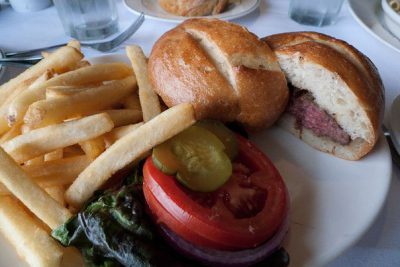 I suddenly thought of one that may be new and pre-dates Silver Bullet. On the 21 March, 1999 I walked from the far side (not Glen Larson) of the Golden Gate Bridge into Fisherman’s Wharf with my family. It was the first day of spring and we were starting four weeks holiday in the south west USA. It was a very warm day and I said that I was going to stop in the first cafe or bar that served any sort of liquid refreshment that we came to. We then came across this bar with over 100 draft (keg) beers and ales. It was called Sam’s Bar; not be confused with Rick’s Cafe in the film Casablanca.

Herb Miller lives in Rowlands Castle with his wife and two cats. He’s been collecting SBs for nearly half his lifetime. If you ask him why he’ll say Simply Because. His favourites to date are the short but sweet, palindromic sub bus, the sulphurous brewmasters Googlewhack and of course, seriously bonkers, simply brilliant and silly B. He fully expects his short booklet to become a shortlisted bestseller. Buy the book from herbmiller.me/shop