Rhyming SBs, where the S-word sounds like the B-word. E.g. Sword board. 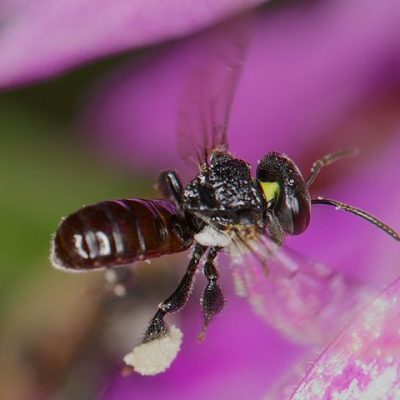 In the Middle ages, over winter and early spring, fisherman used to keep flies enclosed in the warmth to breed maggots. Attaching two or three to a hook they’d fish rivers and ponds for eels and catfish.

More often than not they would mistake other insects as flies. Some of these were sweat bees and sugarbag bees. Whereas untrained anglers just saw larvae the trained apiarist sees bees. There was a particular type of bee, commonly known as the St. Michael’s bee, that was often mistaken for a fly.

It was highly prized by the professional bee men since it was a hardy bee that could be put to work as an early pollinater. In many areas a local law was passed allowing the bee men to seize bees. After a seizure the anglers would often discuss this down by the river, referring to the incident as “taking the mickey”.

Seen before: 1,951 times
Snuggle Buggle Seeing Being Sword Board